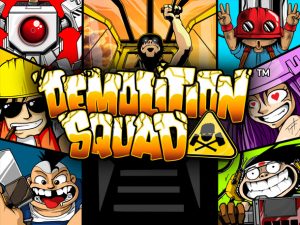 Demolition Squad is a wild and entertaining five reel, 40 payline video slot game produced by industry-leading Net Entertainment. The theme of the game focuses on blowing things up, destroying and crushing things with hammers and other tools, which is sure to bring some action to the computer screen, for example, on a quiet Sunday morning. The construction site with its cranes and construction workers has been used as a background, fitting the theme. After selecting this game, players will be familiar with Japanese anime-inspired animations, audible sound effects, scatter symbols, free spins, and explosive wilds. The basic symbols are presented as playing cards while the more valuable symbols relate in one way or another to the theme, being various tools used for destruction such as drills, hammers and robots, of which the red-eyed robot is the most valuable and coveted symbol. The scatter symbol in this game is a yellow warning triangle. The Wild symbol, in turn, is identified by its large “Wild” logo.

Demolition Squad makes its two wild symbols especially attractive compared to other slot games. When they appear on the reels and quadruples, they cause any symbol that appears between them to turn into Demolition Wild, which at best can lead to stunning winnings, as Demolition Wild can turn into any other symbol.

How to place a bet in Demolition Squad

This game follows a very standard formula for placing bets on slots. In each round, the player can re-select the desired coin size from 0.01 euros to 0.50 euros. The level of the bet can be set from any one to ten. The game’s 40 possible paylines are playable in each round, so the actual bet value is the coin size you choose multiplied by the bet level multiplied by forty. Once you have set the values ​​you want to bet on, all you have to do is press the start button and the game will begin. One of the familiar and popular features of NetEnt games is the “Spacebar Spin”, which makes gaming even faster. The player only has to press the spacebar on the keyboard, which causes the reels to spin non-stop over and over again with the same game settings.

What kind of victories are on offer at Demolition Squad

Demolition Squad offers a wide range of winning opportunities thanks to its 40 possible paylines. Even if it doesn’t hit the richest pot of all, you can accumulate a very nice amount of money from small sums in the game from one round to the next. Demolition Squad has a maximum jackpot of 4,000 coins and a second largest jackpot of 2,000 coins. Demolition Squad’s winning percentage is estimated at a whopping 97%, so the threshold to enter the game is quite low.