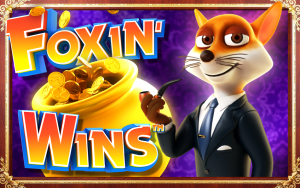 Foxin´ Wins is a 3D slot released in 2013 from the lesser known NextGen. However, the slot has excellent graphics for its time and the super rich and sympathetic fox that acts as the mascot of the game will lead the player to an exciting adventure after winning the pot. The game compares to the works of even the most famous game makers, and not many players get cold because of the super bet feature, for example. The slot has five reels and 25 different paylines, all of which radiate in the middle of an expensive room. The general spirit of the game is luxury-oriented, vintage cars, banknotes, decorated waterfalls and mansions are in the game everyday.

Bonus symbols include a glittering golden spade and the fox itself.

Overall, the game has received positive feedback from players: the game’s humor, great animations and graphics, and awesome bonus features have done their job. The game is followed by time and time again, and you can almost feel sympathy for the fox, it is trying to catch the evil one. Since the first version had a few issues, but still gained a lot of popularity among players, it has also been made a sequel, with updates that have brought new spirit to the game again. However, the original part still retains its place, due to its holistic and enjoyable atmosphere.

In this slot, the bet can be affected a lot, from a few cents to the euro and of course the bet is most affected by the number of lines. Because there are so many paylines available, the total amount of the bet easily rises to a larger scale. As with all games, the chance of winning is small if no risk is taken on 25 separate paylines, making the game exciting and allowing both small and large winnings to accrue to the player’s account at a steady pace.

The maximum payout in the game is 2,000, although with a jackpot it can double to 4,000. To achieve this pot, the reels must hit exactly where they are and all lines must be fully operational. The chances of winning are greatly enhanced by the SuperBet feature, which you can choose according to different levels or it can also come randomly during the game. In the random version, the fox can appear on the third reel and turn it into a wild card. On the other hand, if Superbet Level 1 is selected, the fox may appear on reels 2, 3, or 4. At level 2, it is possible to make a fox appear on any of the reels and of course the chances of winning will be greatly improved. As the chances improve, you have to pay for the selected additional feature, the cost of the first level is 10 additional bets and the amount required at level two is 25 additional bets.

There are, of course, free spins in the game. In order for free spins to win for themselves, a golden, coin-filled spade must appear in at least three or more squares. If luck hits and the golden pots collapse into the squares, 10 free spins will appear for the player to use. If there is a fox symbol on the screen at the same time, it will be activated and all possible winnings will be doubled immediately.